The rolling hills of The Texas Hill Country call to mind the famous wine regions of Tuscany or the South of France.

Considered one of the most scenic drives in America, the country roads wind and carve their way through tall, rugged hills of limestone or granite. Exposed rock and boulders sit in contrast to green hills blanketed by Texas Live Oak and Ashe Juniper. Prickly pear cactus mingle with lush wildflowers as the meandering natural landscape gives way to rows of vineyards planted in parallel. This is Texas Wine Country, the heart and soul of The Hill Country, and the home of Singing Water Vineyards.

Founded in 1997, we were one of the first wineries in The Texas Hill Country AVA. Located just a short drive from San Antonio, our 124-acre property in Comfort, Texas is tucked between Oak studded hills. A meandering creek adds soothing sound to the visual beauty of the landscape.

We grow much of our grapes on property, with more than seven acres of vineyard, which sets us apart from many other wineries in The Hill Country. Our history of quality, hand-crafted wines has built our strong reputation and loyal following over more than two decades. Visitors can enjoy our wines at our historic tasting room, a classic 1880s barn built in the German agrarian style unique to this region of Texas. Our viewing decks set among the trees invite one to pause and take in the dramatic landscape and sounds of the creek.

Singing Water Vineyards has always been passionate about honoring our veterans. We salute both veterans and active-duty service members and their families with our Freedom and Reveille wines. In addition, The Freedom Room at the winery provides a special place to connect, reminisce, share and reflect, all while enjoying great wine. Pictures and stories line the walls, capturing personal histories that are visual reminders of our veterans’ dedication and service to our country. We are veteran owned and support our military community through donations to the Fisher House and USO of San Antonio every year. 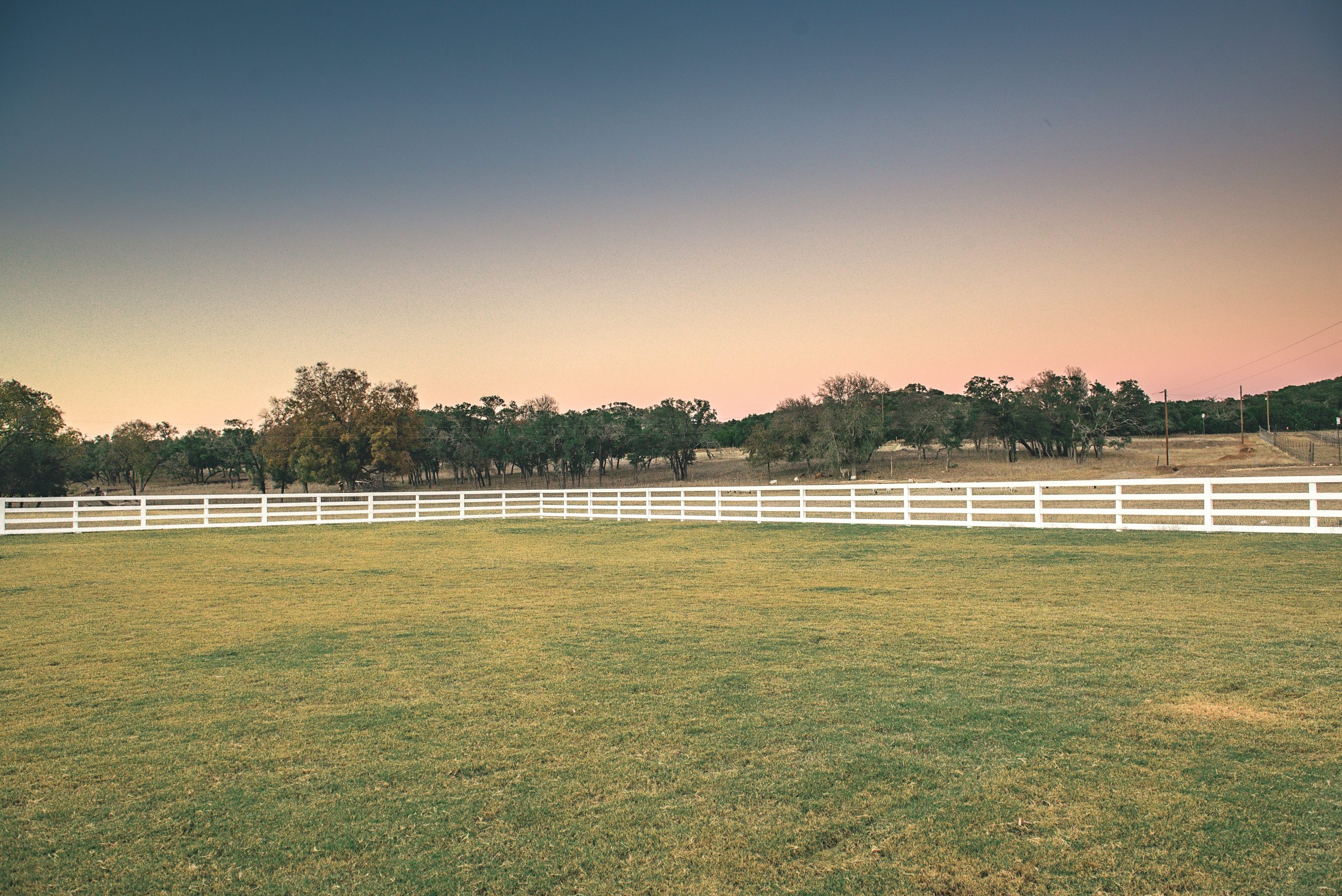 Singing Water Vineyards is a special place where time slows down. It’s a place that calls one back, time and again.

Whether looking for peace and quiet or a lively social event, we have it all. Beautiful wines, daily food offerings, live music and special events—all set against a backdrop of stunning scenery—make Singing Water one of the best, easy getaways in Texas.

“After years of working in software, we wanted something tangible in life to work on. Something you can feel and touch and requires production…craft.” 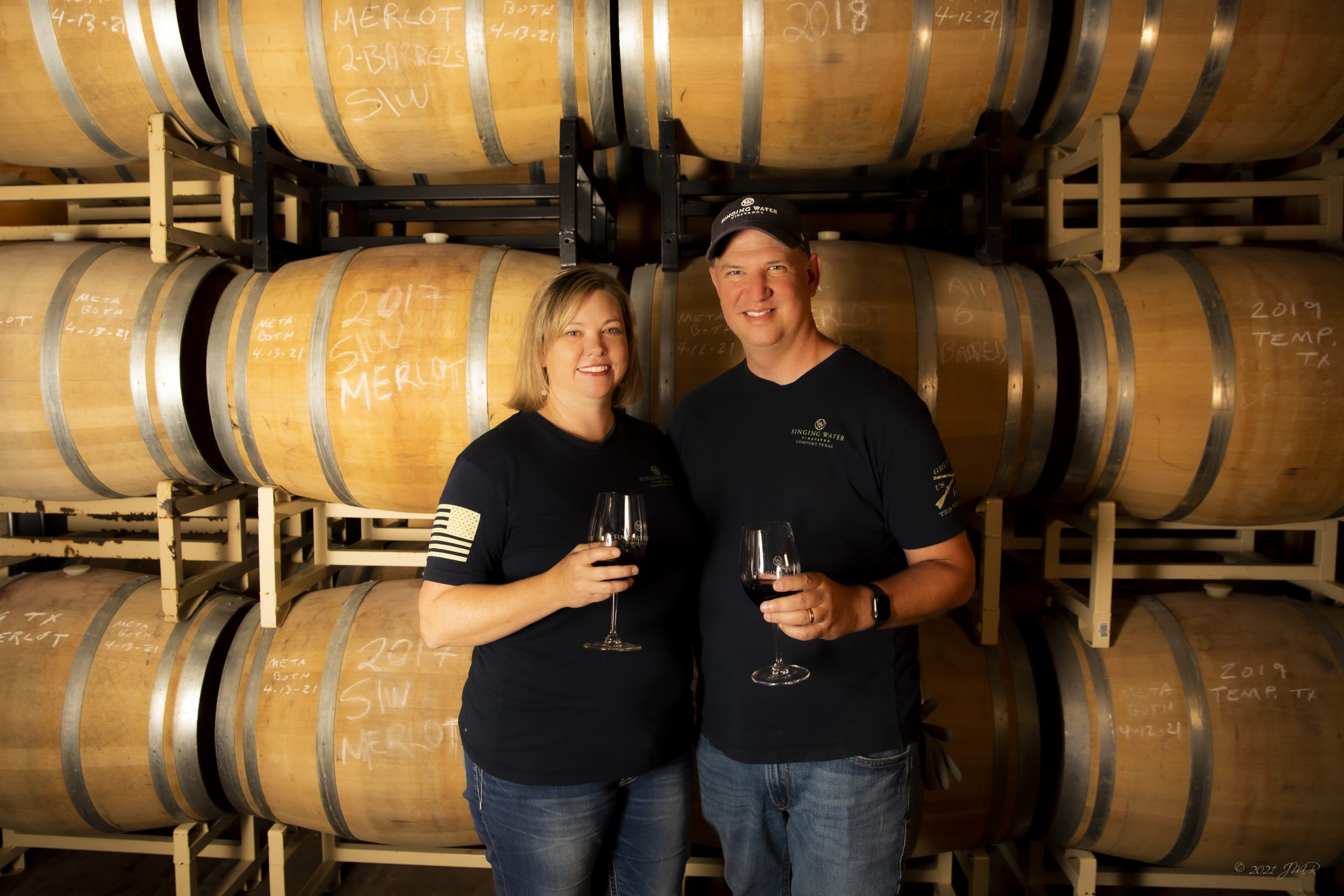 Hailing from Boerne, Texas, Andy and Missy Ivankovich are the owners of Singing Water Vineyards and co-lead our amazing team.

College sweethearts, the couple married soon after graduation and began what would be quite an adventurous life in business and family. Prior to Singing Water, Andy was a software entrepreneur and held executive positions at USAA and JPMorgan Chase in San Antonio. Missy was an elementary school teacher before joining in the software business, holding marketing director and COO positions.

The couple first fell in love with wine and the beauty of the outdoors on an anniversary trip to Napa, not knowing their vacation would soon become a reality. Singing Water was an opportunity to combine their passion for not only wine but entrepreneurship and the Texas Hill Country. In addition, having served in the Air Force as a C130H crew chief, Andy was immediately on board with Singing Water’s longstanding tradition of saluting and supporting our veterans.

After 20 years of marriage and some good role models, Missy and Andy have found that the best things in life are done together. Now with their four children, Mia, Joshua, Aaron, and Kyle, plus a very large Newfoundland named Apollo, the Ivankoviches are blessed to spend time together working, and playing, at Singing Water.

Most evenings, you can find Missy and Andy enjoying their craft with guests, members, and loved ones, toasting another fine sunset over the creek with a glass of our Texas Reserve.

Winemaker Pat Johnson oversees all wine production at Singing Water Vineyards from vine to bottle. Texas-born and bred, Pat was one of the original winemakers on the Texas-winemaking frontier in the early 1990s when grape and wine production was just beginning in the state. Although he’s racked up more awards than he can count, with Pat’s unassuming and hard-working attitude, you would never know.

After studying at one of the top winemaking programs in the country at UC Davis in California and working for E&J Gallo Winery, one of the largest wineries in the nation, Pat returned to West Texas to run Blue Mountain Vineyards, where he established himself as a reputable winemaker, creating award-winning Cabernets.

Pat helped put Texas wine on the map when his Cabernet beat a French Cabernet in the “Texas-French Shootout” of 1996.

After 10 years at Blue Mountain, Pat eventually made is way to Central Texas where he created even more award-winning blends at Driftwood Winery near Austin.

He landed at Singing Water in the summer of 2019, where he has been maintaining the integrity of our existing wine program while infusing his 30-plus years of experience and wisdom into the process. With his new red blend “Reveille” and a striking Orange Muscat, Pat has already left his award-winning mark on Singing Water by following his straight-forward method of, as he says, letting the grapes speak for themselves.

Pat’s down-to-earth approach has been a key to his success. He doesn’t think wine has to be complicated or overly analyzed. In his words, “Just enjoy the wine. That’s all you need to do.”

Pat has set a goal to create something for every wine-drinker who comes through Singing Water’s gates. Come see what he’s created for you.

If you’re a member of our wine club, you probably know Jaisy Pfeifer. As our wine club manager, Jaisy keeps up with our members, managing communications and orders as well as her favorite part of the job: the quarterly wine pick up, where our members come out to the property, pick up their cases and have an excuse to sit around and catch up.

“It’s like a little reunion of people you actually like,” says Jaisy, who loves the people side of her job. Having been at Singing Water since 2017, Jaisy has worked as both tasting room manager and wine club manager but is now focusing her energy on cultivating and growing the club. With a background in real estate, Jaisy joined the Singing Water team for a change of pace. Planning to work just one day a week, she’s now a vital part of our community, and you can see her here most days, either in the office or where she really likes to be—out front, greeting the guests.

Her favorite part of Singing Water is its welcoming and homey feel.

Chef Robert Vedner oversees the culinary side of Singing Water Vineyards as the executive chef of our restaurant, The Grill. His creations balance upscale fare with comfort food favorites, such as an ahi tuna salad made with ahi flown in weekly from Hawaii, an array of flatbreads, and crème de challah au chocolat, also known as chocolate bread pudding.

Chef Robert comes to Singing Water from Ruth’s Chris in San Antonio where he was the executive chef at the La Cantera location. His resume is extensive, including executive chef positions in the healthcare and university dining industries as well as Marriott hotels.

After culinary school, Chef Robert joined the Navy, where he spent most of his tour in the wardroom, cooking for officers. He also cooked for the Lt. Governor of Massachusetts and foreign dignitaries in the Mediterranean. He is a plank owner of the USS Ramage, an Arleigh Burke-class guided-missile destroyer, where he was part of the commissioning crew in 1995.

After a stint as the entertainment chef for Barnum’s Kaleidoscape, a part of the Ringling Bros. Circus, he landed in East Texas eventually making his way to San Antonio.

His menu at The Grill is inspired by the land around him, sourcing ingredients from both the vineyard and the Chef’s Garden on the property. His marinara sauce features our Merlot, and the fresh fruit in his Hill Country spring salad is whatever he picked fresh from the garden that morning.

Despite his high-end experience, Chef Robert does not discriminate when it comes to food, citing meatloaf and country fried steak as some of his home staples. The way he approaches food, he says, is the same way everybody else does: “With a fork.”

Brenda Hardy is one of the newest members of our team, joining our staff as the tasting room manager in early 2020. Bringing with her a decade of industry experience, Brenda knows the ins and outs of the winemaking process from her time at Kerrville Hills Winery where she helped open their first tasting room.

At Singing Water, you can find her in our 1880s constructed barn turned tasting room, welcoming visitors, scheduling tastings, managing staff and educating people about wine. Her favorite thing to teach? “How to enjoy the wine,” she says. “A lot of people drink it too fast.” She likes to encourage guests to slowly drink the wine, so they can appreciate all of its beautiful flavors.

Come visit Brenda in our tasting room to set up a tasting or to simply ask questions about the winemaking process. Brenda is also a great person to ask for wine recommendations. She might just recommend her personal favorite, Singing Water’s Texas Reserve.

Lydia Nida is Singing Water’s resident viticulturist. What is that? Viticulturists are sort of like vine and grape scientists. They are experts at everything that is happening in the vineyard—vines, leaves, buds, soil, grapes, and all.

At Singing Water Vineyards, our vines are our babies, so we would only entrust them to the best and most knowledgeable hands. That’s Lydia.

Hailing from Plano, Texas, Lydia received her bachelor’s in entomology and horticulture from Texas A&M University. She then moved out to California where she received her master’s in viticulture from California State University-Fresno, studying under one of the best viticulturists in the country. She’s worked in vineyards near and far, including Spain, Greece, Italy, and Croatia, bringing her skills and knowledge back to Texas where she and her husband, Robert Nida, own Vine to Vino Consulting, a vineyard and winemaking consulting business. Lydia and Robert have also been making their own wine for several years and launched Pebble Rock Cellars in 2019.

At Singing Water, Lydia keeps her eye on every stage of the vine growth process, determines what grapes should be grown where in our vineyard, and works to create the best possible microclimate for our grapes.

Although her job can be at the mercy of the notoriously undependable Texas Hill Country weather, Lydia loves the challenge. “I’m always having to rethink things and figure out new methods for every year, techniques, and strategies,” she says. “It’s always keeping you on your toes.”